Yvette And The Bodies In The Acid Bath

Yvette And The Bodies In The Acid Bath 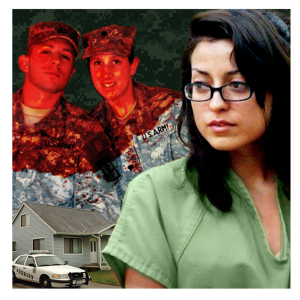 Yvette addressed her court-martial hearing: “I know the big question in everyone’s mind is why I did it. But I have no answers, and no answer will ever be an excuse for what I did. I understood I was shooting them and that’s why I’m guilty.”

Eventually, Randi’s body fell almost on top of her husband Tim’s bloody corpse, so they appeared locked in some macabre and hideous embrace.

It was their faces Yvette couldn’t stand. They were so familiar, yet so altered. So she started pouring the acid on their faces first until the features fizzed and dissolved, leaving a pulpy mass of unrecognisable flesh.

She’d been intending to dissolve the bodies altogether, but the acid took more time to work than she’d realised, and baby Kassidy was sobbing.

Yvette sloshed some more on the heads, changed into the clean clothes she’d brought with her the night before, and went to fetch Kassidy, who lay screaming only yards from her disfigured, murdered parents…

Read the full report in Murder Most Foul No. 126 »