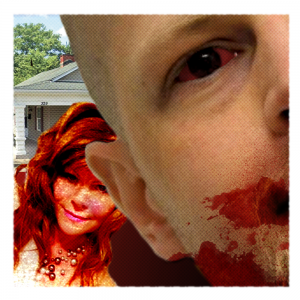 It was September 11th, 2014, the 13th anniversary of 9/11, when police knocked on the door of Tammy Jo Blanton’s apartment. That anniversary, recalling the tragic occasion in 2001 when terrorists destroyed New York’s twin towers, is commemorated across the States, and Tammy, a true patriot, always lit a memorial candle every year in memory of those who died.

Tammy didn’t answer the police knock on her door that day. Instead it was opened after a long delay by her boyfriend, Joseph Oberhansley, 36. He seemed distracted, his darting eyes looking beyond the officers, as if he hardly saw them.

The cops recognised Oberhansley at once. He had form – he had already done time for killing. Small wonder then that they now anticipated with dread what they might find inside the apartment.

The leading detective said: “We are looking for Tammy Blanton, who has been reported missing in what might be sinister circumstances. Is she here?”

Oberhansley shook his head vaguely. “No one of that name here,” he said, in a way that suggested only the opposite could be true.

“Do you mind if we come in and look around?” he was asked.

He did mind, he said. He didn’t want the police poking their noses into his affairs. He suggested in an uncompromising way that they had better leave at once.

“We’re coming in anyway,” the detective replied, stepping forward. Briskly he attempted to give Oberhansley a pat down, but the ex-con resisted menacingly. He was overpowered, arrested, and a search of his pockets revealed a harbinger of what was to come – a knife with blood still fresh upon it.

When the police pushed aside the protesting Oberhansley the sight that met their eyes was gruesome. Parts of Tammy’s body were in the bathtub. She had been stabbed multiple times, and her heart, brain and a lung had been removed by an electric jigsaw. There was blood, bone and gristle everywhere.

On a plate in the kitchen there was skull bone and blood. Beside it was a skillet and tongs with blood on the handle.

Asked to explain the horrific scene to the aghast officers, Oberhansley didn’t have much choice.

“Yes, I killed her,” he said. “I stabbed her in the head, neck and body. I cut her open with my electric saw and took out part of her brain and ate it raw. Then I cooked another piece and ate that. I cut out her heart and ate that too, and I also ate part of her lung…”

Read the full report in Murder Most Foul No. 119 »