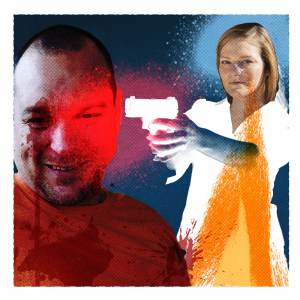 After the rape, when Brittany was satisfied that Todd Smith (no relation) had calmed down and wasn’t paying attention, she texted her mother about what had happened and asked her brother Chris to come back over.

When he arrived, he took his gun from the glove compartment of his car to use as a warning, then told Smith to get out.

Smith adamantly refused, so Chris tried to physically throw him out.

By now, Smith was high on meth, alcohol and a cocktail of other drugs, and he overpowered Chris, starting to choke him in a headlock.

Brittany had been in another room, and rushed in when she heard the fight, just as Chris accidentally fired a shot into the TV cabinet.

She yelled at Smith to let her brother go and picked up the gun that Chris, now turning blue, had dropped.

“He kept choking Chris, saying he’d kill both of us,” Brittany said.

So she shot him. However, it was only a flesh wound, so she fired again. And again. This time, Smith fell to the floor.

“I believe that if I hadn’t shot Todd, he would have killed Chris and me,” said Brittany. “I did what I thought I had to do, and there was no doubt in my mind. There wasn’t then and there still isn’t now.”

Despite what she’d just done, Brittany called the 911 emergency services at once.

“Someone just got shot at 211 Sharon Drive,” she told the dispatcher. “He – he tried to kill me and he…just have an ambulance come please, because I don’t want this man to die.”

But when the police arrived about half an hour later, Brittany feared that they wouldn’t do a rape examination until it was too late. So she made a decision that would have a massive bearing on how she was treated from then on.

She told the police that it was her brother Chris who had shot Todd Smith.

Chris totally supported Brittany’s decision to tell the police that he had been the one to shoot Smith. Neither he nor his sister thought for a moment that a woman who had defended herself against male violence would ever get a fair trial where they lived, in Jackson County, Alabama.

“Jackson County is behind the times,” said Chris. “Women get the short end of the stick around here. If the police knew it was Brittany who fired the shots, they would not have taken her for a rape examination until it was too late…”