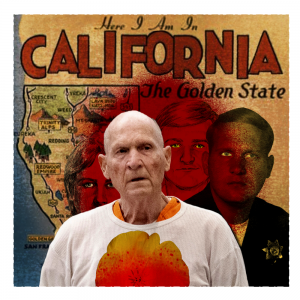 In June 2020, a frail old man of 74, with hollowed cheeks and myopic eyes, was wheeled into the hastily converted ballroom of Sacramento State University.

Rising from the wheelchair, he stood before a makeshift socially-distanced court in a visor. In an orange prison jumpsuit, the defendant admitted his guilt to 13 murders with additional special circumstances, 13 kidnappings, dozens of rapes for which he couldn’t be charged under a statute of limitations, and more besides.

“The scope of Joseph James DeAngelo’s crimes is simply staggering,” said prosecutor Thien Ho. “Each time he escaped, slipping away silently into the night.”

On his arrest in 2018, the culmination of a decades-long investigation, DeAngelo amplified, “I did all those things. I destroyed all their lives. So now I’ve got to pay the price.”

What drove the pathology of the man labelled the Golden State Killer? There are some indicators that help us to understand – childhood trauma for one.

Born to a military family with an emotionally-dead, abusive sergeant of a father, Joe DeAngelo was nine years old when he witnessed his seven-year-old sister’s rape by two US servicemen in Germany – did he carry this image with him for the rest of his life?

Academically able, as a teen Joe attended Folsom High School, California. He was reported for torturing animals and suspected of theft. These suspicions didn’t prevent him from joining the US Navy in 1962. He served aboard the USS Canberra and the USS Piedmont and won medals – the National Defense Service medal, Vietnam Service Medal, and Vietnam Campaign Medal. He lost part of a finger in service.

After the Navy, DeAngelo studied for a degree in criminal justice at Sierra College in Rocklin, California, from 1970. There, he met Bonnie Jean Colwell. They were briefly engaged but Bonnie rejected him when he became abusive. “She broke her engagement to you when she realised that you had become manipulative and abusive,” said her friend, Jane Carson-Sandler, a later rape victim of DeAngelo. “Even a gun pointed at her face could not make her choose you.”

“We always thought there was a Bonnie significant in his life – it could be a mother, a wife, a girlfriend, a childhood crush,” said investigator Paul Holes.

Do DeAngelo’s childhood and college years provide adequate reason for his pathology?

“I’ve heard that he may have been abused as a child; that he experienced sad things in his life; that he had to move around a lot; that his fiancée jilted him,” said rape victim Gay Hardwick. “But a lot of people go through bad times, and they don’t become serial rapists and murderers.”