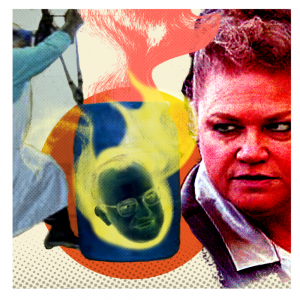 Larissa Schuster probably wasn’t the first woman ever to have complained about their soon-to-be ex-husband to a hairdresser. But, unlike most in that situation, when she said that she would actually kill Tim if she could get away with it she really meant it…

So what really did happen to Tim Schuster that terrible morning in July?

Although accomplice James Fagone’s testimony was never heard at Larissa’s trial, he claimed that Larissa wanted to rob Tim’s home again, but this time with Tim watching so that it would be the “ultimate humiliation.” She also thought that because of his alarm system they would only be able to get in if Tim was there to let them in.

Fagone received a telephone call from Larissa and she told him to “get his things” and “come outside.” He grabbed a backpack which had Larissa’s chloroform, the stun gun, and some cable ties inside.

As she was driving him to Tim’s home she made a quick call to her husband and told him their son Tyler was sick. Tim looked worried when he opened the door and Fagone said that he and Larissa pushed their way in. Fagone fired the stun gun, hitting Tim in the arm, and then Larissa knocked him to the floor. Fagone said he then got Tim in a headlock until he passed out, at which point Larissa put some chloroform rags into her husband’s face.

Fagone said he could hear Tim snoring. Tim was unconscious but alive. Surprised and outnumbered, he hadn’t stood a chance and they tied him up and took him to Larissa’s garage. They managed to get him head first into the blue barrel and it was then that Larissa started to pour in the acid.

We’ll never know if Tim was conscious as the acid first started to burn the delicate tissues of his face or whether, with his last breath, he felt the corrosive fumes destroy his throat and lungs, but death was only moments away. By the time they tried to put the lid on, his body had already started to dissolve…