Twice As Evil As Anyone Thought

Twice As Evil As Anyone Thought 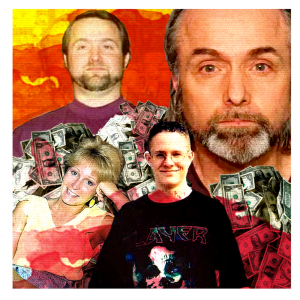 By 2008, Karl Karlsen’s 23-year-old son Levi had separated from his wife and was father to two little daughters. One morning in November, Karlsen asked him to come over and repair some cables on his pick-up.

Levi arrived to find the truck in the garage. It was raised up on a single jack, resting on its back wheels like a wheelbarrow, and with its front tyres removed.

“Don’t let the suit fool you,” quipped Karlsen. “I’m still evil old me underneath. Cindy and me are off to a funeral. Then the mourners are invited to lunch at the country club.”

Slapping Levi on the back, he slipped him $50, and pointed out the transmission cables that needed work.

“They’re cursed difficult to reach,” he said. “You’ll have to get right under. I’d do it myself if it wasn’t for my back.”

Karlsen watched his son drag his tool bag close to the truck, take out a couple of wrenches, and slide trustingly under the vehicle.

Seconds later, Karlsen darted forward and kicked the jack so hard that the truck slipped off it and crashed onto Levi, crushing his chest.

All Karlsen could see were Levi’s feet sticking out from under the truck, so he knelt down to check whether he was dead. The young man was still wearing his baseball cap and clutching the two wrenches, but his glasses had been thrown off to one side. He lived for a few minutes, but Karlsen made no attempt to jack the truck off him.

When he was sure Levi was dead, Karlsen brushed down his suit, closed the garage door, and rejoined Cindy in the house. They returned from the funeral four hours later to a scene Karlsen described as “a terrible accident…”