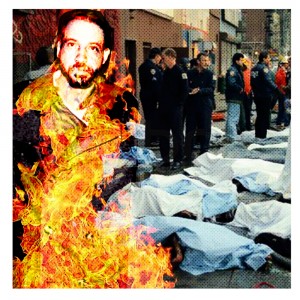 Three weeks had passed since Lydia had finally given Julio Gonzalez the heave-ho from her apartment. He had just lost his job at a lamp factory in Queens. He was already two weeks behind on the rent of his room. The landlord later said, “From what I know, he’s down to his last hope.”

That fatal night, March 25th, 1990, at the Happy Land nightclub he had drunk too much. Now, his body bruised from hitting the pavement, his pride crushed by his ex-girlfriend, he dragged himself down the empty street. Walking around the Bronx at 3 o’clock in the morning has never been safe, but Gonzalez had other things on his mind.

Steadfastly, he walked towards a petrol station on Southern Boulevard. Behind the bulletproof glass the attendant, with a full view of the petrol pumps, was easily persuaded to break the city law forbidding the sale of petrol in containers.

Words were exchanged through the intercom system, a dollar bill was deposited in the metal box, and Gonzalez’s container was filled with petrol.

Back at the Happy Land, he hovered about outside, waiting for a chance to sneak back in. When the bouncer went upstairs, he spread the fuel at the bottom of the staircase, the only open entrance into the club, and dropped two matches on to it

The flames quickly spread from the entrance through the first floor and up the stairs. The club filled with smoke, asphyxiating victims “so rapidly that they were found still holding drinks in their hands.”

Within seconds the Happy Land was a ball of fire. An hour later Gonzalez was responsible for what was then the biggest mass murder in US history.

He could not have chosen a more deadly place to wreak his revenge. Happy Land was a fireball waiting to happen – a death trap for the noisy, happy crowd of mostly young people.

Weeks earlier it had been the subject of the latest shut-down order due to fire hazards – there were no sprinklers, no emergency exits, emergency lights or fire exits – no safety precautions whatsoever in the event of fire. The order was ignored, and after the closure the building was illegally re-opened.

That night, within half an hour 87 people were burned alive. Nineteen bodies were found downstairs, the others upstairs. Six bodies were found within several feet of the front door. Most of the deaths were from asphyxiation from being trampled.

Revellers were smothered by black smoke or fatally burned. It happened so quickly that some appeared like frozen figures from Pompeii.

Some still had their drinks in their hands, some had torn off their party clothes engulfed by flames. Others died hugging or holding hands. Bodies were piled up on the dance floor in the darkness, their faces covered with soot. A firefighter remembered that some of the victims “looked like they were sleeping…”