Revenge Of The Sausage King

Revenge Of The Sausage King 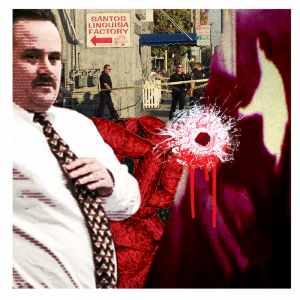 On June 21st, 2000, the inspectors went to a committee meeting at their government offices. Jean Hillery and her federal colleague Tom Quadros, 52, outlined the case against Alexander. “We have been to this factory on several occasions,” she told the meeting. “Mr. Alexander is a very upset and angry man.”

The committee agreed that Alexander should at once be served with a notification ordering him to stop selling meat, after which they would seek a court order to close down his sausage factory.

Four inspectors were detailed to go to the factory. With Jean Hillery and Tom Quadros were Bill Shaline, 57, and Earl Willis, 51. They arrived shortly after midday, when most of the staff were having lunch, and an argument with Alexander began almost at once. Soon he was becoming verbally abusive.

The police had heard this story before – they had been called to a previous incident at the factory in March that year. There was no violence on that occasion, nor were they given any indication that there would be this time. The dispatcher said: “We have two patrol officers in your area, but they are currently working on other incidents. We will send someone to you as soon as possible.”

Twenty minutes after Tom Quadros made the first call, and while the argument in the factory was reaching fever pitch, Alexander said he needed to go to his office to retrieve some paperwork. The four officials waited in the lobby of the building, hoping that he had come to his senses and would comply with the orders.

But Alexander suddenly appeared at the door, a machine-gun in his hand. Before they had time even to register fear he blazed away at them. Hillery, Quadros and Shaline slumped to the floor from the burst of automatic fire. Willis, who was standing a few feet away from the others, had a split-second to flee. Alexander chased after him, firing five more shots as the terrified inspector escaped into the street.

Alexander then returned to his office, calmly reloaded his weapon, and shot each of the wounded inspectors in the head, execution style…

Read the full report in True Detective May 2021 »