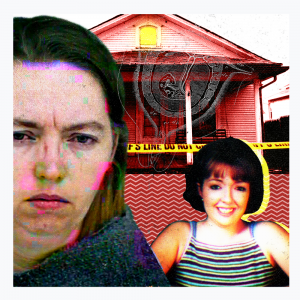 Lisa Montgomery’s grip on reality was increasingly fragile and her ex-husband used this to threaten a custody battle for the children. She’d been sterilised after the birth of her fourth baby, but fantasised repeatedly that she was pregnant again.

On December 16th, 2004, at the age of 36, she drove from her home in Kansas to the tiny farming town of Skidmore in Missouri to meet Bobbie Jo Stinnett, a woman she’d got to know online through their shared love of rat terrier dogs.

Having discovered Bobbie Jo was eight months pregnant, Lisa told her she too was expecting, and the women chatted online about their impending births. But in other emails to her, Lisa posed as an interested dog breeder under the fake name of Darlene Fischer, and it was in this guise that she arranged to visit Bobbie Jo to buy one of her puppies.

Twenty-three-year-old Bobbie Jo had lived in Skidmore all her life, and it seemed as if the whole town had turned out to celebrate when she married her childhood sweetheart Zebulon Stinnett in April 2003. Thrilled to be expecting their first child, they were saving up for a home of their own.

Bobbie Jo loved animals, especially dogs and horses, and had worked at a local garden centre and pet store before taking a better paid job at the Kawasaki plant where Zebulon worked. Described by her friends as quiet and kind, she was a bright student who enjoyed river swimming and computer games.

Skidmore must have looked bleak and rundown that midwinter morning as “Darlene” stopped outside Bobbie Jo’s house. In her car was a rope, a knife and a syringe. She’d come for Bobbie Jo’s foetus, not a puppy, and her mind swirled with descriptions of the Caesarean sections she’d researched online.

She wasted no time. As soon as Bobbie Jo turned towards the living-room, Lisa attacked her from behind, throttling her with the rope. The young woman fought desperately before she fell, grabbing handfuls of blonde hair from the wig Lisa was wearing. She was unconscious, but not dead, when Lisa hacked open her womb, cut the umbilical cord and removed the baby who was still alive.

Leaving Bobbie Jo to bleed to death, her intestines spilling onto the carpet, she tucked the child inside her coat and drove home.

At 5.30 that afternoon, Bobbie Jo’s mother called round to see her daughter. Her screams of horror as she tried to tell the 911 dispatcher what she’d found make nightmarish listening. “It’s as though her stomach has exploded,” she sobbed.

Sheriff Ben Espey said: “It was the most gruesome crime I’d ever seen in twenty years on the force. It will haunt me for the rest of my life…”