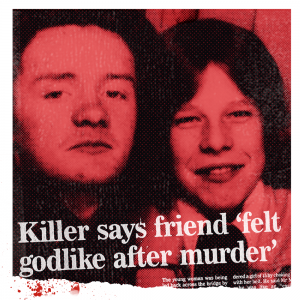 David Mulcahy married in 1978, as did John Duffy in 1980, but neither he nor Mulcahy lost their urge to rape. And in 1982 they chalked up their first rape victim, a 21-year-old woman they grabbed in Kilburn, north-west London. “We were both very excited,” Duffy was to confess later, “and said we should do it again.”

So they did. Again and again and again. They also became more organised, selecting secluded spots in advance where they could take their victims, and planning their escape routes. Mulcahy stuck strips of tape inside his jacket to use to gag and blindfold the victims, Duffy carried a matchbox containing tissues to wipe away and burn forensic evidence.

Both now worked for Westminster Council, Duffy as a carpenter, Mulcahy as a plasterer. Duffy had previously worked as a carpenter for British Rail, getting to know many stations intimately. He was now to use this knowledge in choosing sites for the pair’s crimes, and, when their string of rape-murders occurred near railway stations, the unknown killer was dubbed “The Railway Rapist.”

Duffy was to recall: “We normally travelled by car. We called it hunting. Part of it was looking for a victim, finding her and tracking her. David had a tape of Michael Jackson’s “Thriller.” We used to put that on and sing along to it as part of the build-up.”

“Thriller” begins: “It’s close to midnight and something evil’s lurking in the dark…” It continues: “No one’s gonna save you from the beast about to strike…”

Carrying knives, the pair frightened their prey into submission by threatening to slash them. To prevent them from screaming or getting a good look at them, Mulcahy had his strips of tape ready to seal the victims’ mouths and eyes.

The pair raped or conspired to rape a dozen times between October 1982 and March 1985, becoming an efficient team working in unison. A victim described them as “two bodies with one brain. They didn’t tell each other anything. They seemed to be able to communicate without words, just by nodding their heads.”

On Sunday, December 29th, 1985, they graduated to murder. Nineteen-year-old Alison Day made the mistake of enraging Mulcahy by trying to run away after they had raped her when she got off a train at Hackney Wick station, east London. She had also seen Duffy’s face. They grabbed her, strangled her and dumped her in the River Lea where her body was found two weeks later weighted with blocks of granite.

According to Duffy, it was Mulcahy who fancied “playing God” and was turned on by killing…