Mass Murder In The Name Of Ecology

Mass Murder In The Name Of Ecology 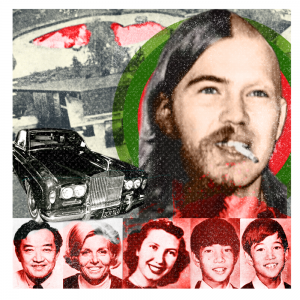 On the cold, drizzly Monday evening of October 19th, 1970, Sheriff Lieutenant William Shaw and Sergeant John Noren had seen a glow in the leaden sky. The glow came from a hillside above the tiny coastal community of Soquel, and the two patrolling officers figured there was a fire on the ridge above Rodeo Gulch, a foothill valley served by a narrow road just north of Soquel.

Speeding towards the blaze, Shaw and Noren had covered little more than a mile on Rodeo Gulch Road when they saw the fire was a burning house, served by a driveway leading up a hillside. The lieutenant and the sergeant veered into the driveway, but within 100 yards they found it blocked by a car pulled across the road. They skirted the car by zooming out into an adjacent field.

They continued up the driveway and at midpoint, where the paved surface became a dirt road, they found another car jammed sideways across the lane. As they flashed around the second blocking car they could see the distinctive silhouette of a Rolls-Royce. They sped the last 100 yards to the blazing house and radioed for a fire engine. Then they made their way as close to the sprawling house as the heat would allow.

They could see no sign of anyone trapped in the dwelling. Flames shooting 30 feet into the air from the roof were reflected on the water of the swimming pool beside a patio at the rear of the house.

The fire engine’s siren was sounding closer. It sounded closer still as the crew moved the obstructing cars to clear the driveway.

Fire chief Ted Pound knew that his truck was not carrying enough water in its emergency supply tank to quench such a fire, and there wasn’t a pressure hydrant in the neighbourhood, so he ordered his men to start pumping from the swimming pool.

Moments later, as firemen dropped intake suction hoses into the water, they saw that they were faced with more than a destructive blaze. A body was floating face-down on the surface of the pool and, in the glare from the flames, the firemen could see four more huddled figures in the pool’s deep end. All the bodies had their hands trussed behind their backs, and the water, illuminated by the light of the blaze, was tinged an ominous red…