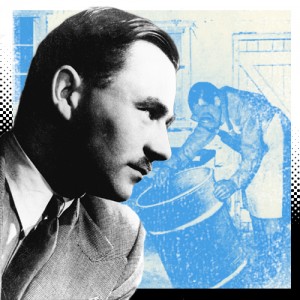 “It was quite simple once a technique had been evolved, though at first I made silly mistakes – such as when I put too much acid in a drum and the acid boiled over when the body was inserted.

“You may think that a forty-gallon drum standing only about four feet high would be too small for such a body, but my experiments showed that as the drum tipped, the body slumped down to the shoulders and the legs disappeared below the surface of the drum.

“Thin people were much more easily disposed of, for I found fat most difficult to dissolve. For this reason Mrs. Durand-Deacon was a confounded nuisance – far more trouble than any of the others. She simply would not disappear and next day when I had expected her body to be entirely dissolved I found a large piece of buttock floating on top of the sludge and grease that was the rest of her.

“I emptied off the grease and put in fresh acid, expecting the following day to see the dissolution complete as in previous cases. She simply would not go and there were still some parts left, though quite unrecognisable for what they were, when I emptied the sludge on to a rubbish heap outside the shed and threw the drum carelessly among scrap iron and other drums that had already been used on many occasions.

“I do not see anything remarkable in applying this method of dissolving bodies in practice. There is nothing horrific in it for when life has gone a body is just clay. There can be no difference between cremation, destruction in the earth and my method of acid dissolution. Once life had gone it became a pure matter of how best to disintegrate the remains.

“I claim that my acid bath technique was a much more satisfactory method than the ghoulish practice of a funeral. I can see nothing horrible in it at all and certainly cannot understand the public horror at my method of disposal.”