Son Kills Father In Classroom With Bow And Arrow

Son Kills Father In Classroom With Bow And Arrow 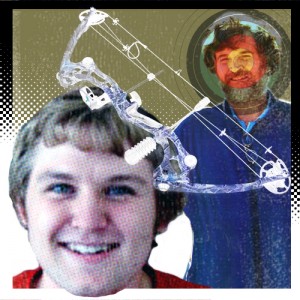 Six students were settling down to an early-morning computer science class at Casper College, Wyoming, in November 2012 when a young man barged in carrying something wrapped in a brown blanket.

Looking up from his screen, Professor Jim Krumm greeted his son with surprise: “Hi, Chris! I wasn’t expecting you. What are you doing here?”

Chris Krumm had just driven 2,000 miles from Connecticut for this moment, and he let the blanket fall with a degree of drama, revealing a 55lb hunting bow primed with an arrow.

Lifting the weapon deftly to his shoulder, he walked to within four feet of his father and fired an arrow into his head. It stuck there, gushing blood, as the professor crashed to the floor.

The son may have assumed his father was dead, but seconds later he staggered to his feet, clutching a table for support, desperately urging his stunned students to get out.

To give them time, he lunged at his son who was by now brandishing a foot-long hunting blade. They wrestled for a few moments, but Chris stabbed his father repeatedly in the chest before turning the knife on himself.