“I’m Going To Kill My Folks”

“I’m Going To Kill My Folks” 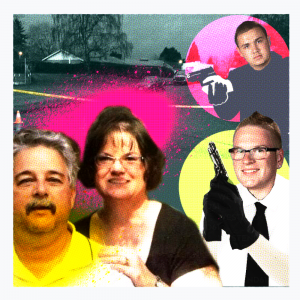 Brett Pearson’s schoolfriends laughed when he told them he wanted to kill his parents. No one took that kind of brag seriously. It was just teenage angst – all cheap talk and empty threats. And this was especially true in the wholesome little Oregon town of Keizer where Brett and his family lived.

Four miles from Salem, the state capital, Keizer is a template for small-town America. Set in rolling arable farmland, its tractors, cycleways, and flower festival are visitor attractions, and its community apparently law-abiding and church-going. Brett’s father Bill was a local businessman and his mother Michelle an accountant and Sunday school teacher.

But on Wednesday, March 5th, 2014 Brett posted a Facebook message saying: “Life is about to change in a number of ways you couldn’t believe or understand.” None of his friends grasped what it meant – except Robert Miller.

At the time of the message, they were together in Brett’s bedroom fuelled by enough methamphetamine to make them believe killing Bill and Michelle would solve all their problems and set them free.

Creeping along the landing, Robert nudged open the bedroom door and found Bill asleep. Despite shooting him several times, he failed to kill him, and when Brett realised his father was still alive he grabbed the gun and pumped at least two more shots into him.

Hearing the noise, Michelle was running to the bedroom when Robert shot her in the torso and at close range in the neck and head.

Neighbours had seen the boys driving off mid-evening, but it wasn’t until 11.28 p.m. that local police responded to an alarm call from the Pearsons’ home security company. Somehow, Bill had managed to struggle to the alarm and tell them he’d been shot. He was barely alive and gravely wounded, hardly aware that the paramedics had to stretcher him over the body of his dead wife to get him to the ambulance…