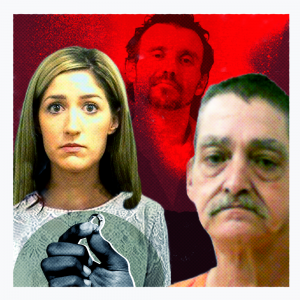 When Amanda and Larry went to Virginia to get married, it was a modest wedding. Nothing fancy, just a simple ceremony at a small, local church. No frills, no big family do, effectively just a quiet little get-together to tie the knot.

Larry didn’t give Amanda anything special, but Amanda gave Larry something – a false name. That’s right. Not a new name, a false one.

Yes, that does mean alarm bells should be ringing in your mind already. Maybe they had something to hide?

Was it the age gap? Larry was 55, Amanda 31. It’s true they weren’t exactly high school sweethearts, but there have been much bigger age gaps between people before. Twenty-four years is quite a lot, admittedly, but it’s not completely exceptional.

Was it the fact that they crossed a state line from West Virginia to find a place prepared to carry out the ceremony?

Well that doesn’t help, but even that wasn’t the most bizarre thing about the ceremony.

You see, Larry was Amanda’s father. Her dad.

And no matter what state you’re in, either literally or metaphorically, that’s wrong on every level.

Yet even that wasn’t the worst thing that the two had done in the weeks prior to the wedding.

Even how Amanda and Larry McClure were caught makes the mind boggle – Larry was arrested for failing to register in Virginia as a convicted sex offender. He’d spent 17 years in prison for sexually assaulting a young girl.

When he was picked up, he thought the best way out of his difficulties would be to tell the West Virginia State Police where to find the body of his daughter’s – or was it his wife’s? – boyfriend.

And the more the police learned about Larry and Amanda, the weirder, and gorier, the story became…