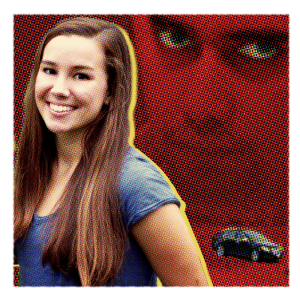 The police retrieved CCTV footage from a homeowner who had a camera installed outside his home. It showed a black Chevrolet Malibu with distinctive chrome mirrors and door handles driving back and forth in the area where Mollie was jogging.

This car driver, the detectives speculated, could be the killer, making his last-minute reconnaissance before seizing his prey.

The car belonged to Cristhian Rivera, 24, who lived and worked in the rural area around Brooklyn, Iowa. He had arrived illegally from Mexico when he was 17 and had lived in the area for some years, working at several farms before taking a job at a dairy farm.

On August 21st, 2018, Rivera took them to a remote cornfield where, hidden under corn stalks, lay the decomposed body of Mollie Tibbetts. She had died from multiple stab wounds to her head, chest and neck, but the murder weapon was never found.

Any hope the Tibbetts family might have had that they would have time and privacy to deal with their grief was shattered once the media circus rolled into Brooklyn. The resultant publicity catapulted Mollie’s murder into a national debate, particularly among those who sought to make as much political capital as they could out of the tragedy.

Mollie Tibbetts was big news from coast to coast. Iowa’s Republican Governor, Kim Reynolds, put out a statement saying she was “angry that a broken immigration system allowed a predator like this to live in our community.”

Inevitably President Trump weighed in: “A person came in from Mexico illegally and killed Mollie,” said Trump. “We need the wall, we need the fence, we need protection, and we need our border laws changed. We need Republicans to do this because the Democratic Party certainly isn’t going to do it.”

The Tibbetts family thought that politicians were cynically using Mollie’s tragic death to further their own political agendas. Mollie’s father criticised what he called the “heartless and despicable” use of his daughter’s death to score political points.

He said, “The Hispanic community are Iowans. They have the same values as Iowans, I denounce those who appropriate Mollie’s soul in advancing views she would have believed were profoundly racist…”