When Julie Went Shopping For A Gun…Her Family Were Doomed

When Julie Went Shopping For A Gun…Her Family Were Doomed 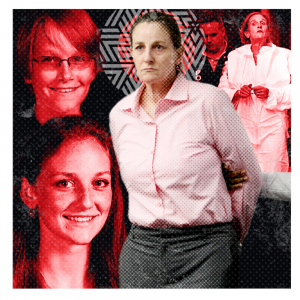 “This is a tale of two mothers,” she told the jury. “She was sick. She battled depression. She couldn’t reach out to her husband Parker for help because he was out of the country for so much of the time. This awful, hidden disease transformed Julie’s life in ways we can’t even begin to imagine.

“My client, this poor woman, never really had a chance of living a happy and fulfilled life. She was molested at just six years old, and she will testify to that.

“She was again sexually assaulted at age 17. She left the military after ten years of serving her country with distinction because the depression was kicking in and she wanted to start a big loving family to wash away the pain of her own childhood. She wanted six children, but Parker only wanted two. After Beau was born, Parker had a vasectomy without telling her.

“It tore her to her soul. A mother and former soldier lost her battle with chronic mental illness. All she wanted was to live a happy family life but this cruel illness took everything from her, including her own children.”

Everything had apparently been completely normal in the Schenecker household that January.

As ever, Parker was on a tour of duty, this time in Qatar, and the two teenagers were doing the regular teenage things – Beau was going to football practice, and Calyx was spending her time on social media.

But one day as she picked Beau up from practice, Julie did something very different.

She bought a gun.

Julie drove 40 miles out of her way to the gun store, and chose a .38 known as the Saturday Night Special. The owner of the gun store said she had appeared completely normal, and they’d engaged in a pleasant and relaxed conversation.

As soon as the five-day cooling-off period was over, she drove back to the store with Beau to pick up her gun and ammunition. And on the way home, she shot him dead.

When she got home, she went up to Calyx’s room, where the girl was on her computer, and shot her too. Once in the back of the head, once in the mouth. Then she lay Calyx on her bed, put on a dressing-gown and went out to sit on the porch where she passed out.

The alarm was raised by Julie’s mother. Concerned that Julie wasn’t picking up the phone, she contacted police who drove out to the property to make the gruesome discovery.

Beau’s body was still in the family car, while Calyx was on her bed, covered by a blanket. They found Julie unconscious on the porch, her dressing-gown covered in blood.

Then began the process of trying to unravel the mystery of why a woman would shoot her two beloved children dead?