“I Like To Torture Men While Their Women Watch”

“I Like To Torture Men While Their Women Watch” 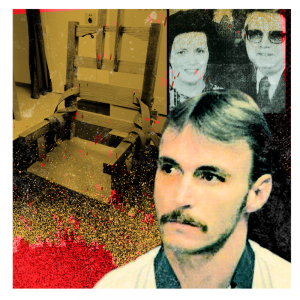 On June 3rd, 1983, 55-year-old John Sawyer and his wife Mary were at the dinner table in their log cabin on Blackjack Mountain, near Atlanta, when there was a knock at the door.

Going to answer it, Mary found herself confronted by Nicholas Lee Ingram, then 19. Brandishing a long-barrelled pistol, he forced his way in, ordering the couple: “Get back in the house or I’ll blow your heads off.”

After taking $60 from the husband he marched the Sawyers to some woods nearby. There he tied them to a tree and stuffed a piece of shirt into their mouths to keep them quiet.

Any doubt they might have had about his intentions was swiftly dispelled. “I like to torture men while their women watch,” he told them. “It will take two or three days for your bodies to be found, and if any of your family finds any evidence to convict me, the most I’ll ever get is thirty years. And I’ll come back and get them.”

The couple then endured two hours of torment from their drug-crazed torturer before he decided the time had come for their execution.

His first shot killed John Sawyer, but as the husband slumped against his bonds his weight pulled his wife down, causing the next shot to do no more than gash Mary Sawyer’s head. She too slumped, pretending to be dead as she heard what she later described as “a popping sound” and realised “it was the air going out of my husband’s body.”

Twelve years later she sat at home awaiting the final sequel with her family and second husband. On Death Row for most of that time, Ingram was at last to be executed. He was to become the 434th person despatched in “Old Sparky,” the Georgia electric chair which dated from 1924…