“This Woman Wasn’t Just Murdered, She Was Butchered”

“This Woman Wasn’t Just Murdered, She Was Butchered” 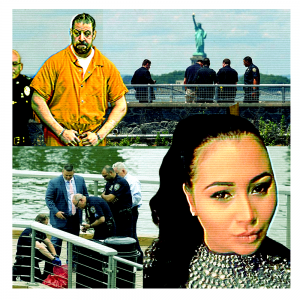 Most people would say that the walk in the park that John Sims and his wife took every morning with their Golden Retriever was something rather special.

For as they walked from the suburb of Carroll Gardens along the shore of the Hudson River their route gave them a stunning view of the Manhattan skyscraper skyline and the Statue of Liberty – a daily reminder that they lived in the pulsating heart of the land of freedom.

But shortly before midday on the warm sunny day that was June 27th, 2017, that rosy view turned into a nightmare that would haunt the Simses forever. In the lapping waters of Red Creek Channel, on the rocks near Pier 44, was the naked, decomposing body of a woman.

John Sims recalled thinking as he staggered back from the shock: “That woman wasn’t just murdered. She had been butchered. You could see she had been deliberately dismembered. Her head was missing, and parts of her legs were missing too. I wanted to throw up, but I was in too much shock.

“While she was on the phone I noticed a tattoo on the right thigh of the corpse. The body had been carved up and the cuts looked clean. Whoever did it must have used some kind of chainsaw.”

When police arrived they too noted at once the distinguishing tattoo on the victim’s hip that would quickly reveal the corpse’s identity. The tattoo was photographed and news reporters along the East Coast were asked to inquire of readers and viewers if anyone recognised it.

Many who didn’t identify it shuddered and wondered if there was a serial killer on the loose.

The widespread publicity attracted the attention of Gladys Quintero, whose daughter, Jenny Londono, 31, had gone missing. Jenny and her mom always spoke on the phone every day, but Jenny had not been in contact for two days. When the media reported that the unidentified victim had a distinctive tattoo just below her right hip, Gladys felt an icy fear.

At the 76th Precinct police station she told a detective: “The body in the river may be my daughter. She had a tattoo in the same place.” Gladys was shown the remains of the body, and her worst fears were confirmed…

Read the full report in Master Detective May 2020 »