After The Slaughter, He Went To See The Sights

After The Slaughter, He Went To See The Sights 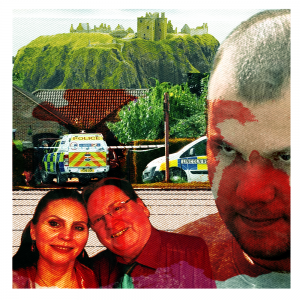 Was he happy now? How could he not be – standing here among the foundations of Tintagel Castle, Cornwall, looking out over Merlin’s Cave towards the channel beyond?

If Andrei-Mihai Simion-Munteanu, 22, had waited a week, he might have been even happier. Certainly he would have found access to the castle much easier. The opening of the new footbridge on August 11th, 2019, removed the need to trek up a hundred steps from the sandy isthmus below.

But no, Andrei could not wait a week. He was on a tight schedule – next stop would be Cardiff and a date to see The Lion King at a cinema. He bustled his way through the milling tourists – “Pardon me,” “Sorry” – to make his way back to the village with its array of shops selling Arthuriana, the world’s best pasties, fudge and witches’ spells guaranteed to work if used correctly.

One or two teenage girls turned to look at the rather handsome young man, so determined, so brusque, so commanding, as he strode along Fore Street towards King Arthur’s Car Park. They had no idea that they were looking into the face of a double-killer.

A week earlier, late in the evening of July 28th, 2019, Andrei had asked his mother, Dr. Premm Leela Monti, 51, to come to his bedroom in the family home in Lincoln Road, Branston, Lincolnshire. He knew she would come as she liked surprises.

But surprise didn’t begin to describe what awaited her in her son’s bedroom. As she entered, he grabbed her and began to suffocate her with an oven glove.

“Afterwards I felt awful,” he later admitted. So why had he done it?

Andrei was depressed and resentful, having recently failed his computing exams at the University of Lincoln. “At some point evil came to my mind,” he said later when pressed as to his motives. “One second it wasn’t there and then it was. Since I was evil, if I did an evil act I would be happy and my depression would go away. I thought I would not feel guilt because an evil person would not feel guilt.”

Her partner was Dr. Bob Tully IV, 71, from Albuquerque, New Mexico, a former software engineer. When he woke up and asked where Premm was, Andrei shrugged. He said Bob should check the kitchen.

“Bob went into the kitchen and I hit him once from behind with a hammer,” Andrei said. “He collapsed on the floor. I hit him four or five times. He wasn’t moving.”

Andrei knew what was likely to happen to him after the deaths, so it was time to tick a few things off on his bucket list. He borrowed Bob’s Toyota RAV4 and drove south past Stonehenge – “but didn’t go in,” he later noted – before heading towards Cornwall. After that, it was Cardiff and a visit to the Odeon cinema before taking the long journey north to Edinburgh and Aberdeen.

His debit card and the Toyota’s licence plates left a trail as bright as a snail’s in moonlight. Andrei was found sleeping inside by Police Constable Simon Madden.

“Do you know where your mother is?” PC Madden asked. At this point, the police had not entered the family bungalow and were not aware of any deaths.

“We should probably talk about that at a police station,” Andrei began.

“If I told you where she was, you would arrest me…”