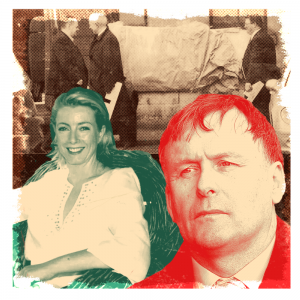 A bathroom door is carried into court and propped against the witness-box in a trial that will prove a millionaire Irish businessman guilty of killing the beautiful wife he loved.

As Brian Kearney stares at it, he remembers that cloudy morning in February 2006 when he woke up in his baby son’s bedroom, knowing for certain that Siobhán wanted to leave him.

He had already received letters from her solicitor about separation, but part of him refused to accept that their relationship was definitely over. After all, they had so much to lose: their son growing-up, the hotel in Majorca, family life in Dublin…

What happened next remains a mystery. Whether they quarrelled violently, whether she ignored him, or whether rage over the disintegration of their marriage simply boiled over, no one will ever know. But Brian Kearney seized his petite wife and strangled her till her face swelled and turned purple.

Seeing her lifeless body curled up on the carpet at his feet, he was engulfed by terror and guilt. He saw the Dyson vacuum cleaner in a corner of the room and dragged it over. He unwound the flex and knotted one end to the bathroom door handle. Panting hard and with shaking hands, he looped the rest over the top of the door, and hoisted her body against it, coiling the flex round her neck, and pulling it tight. But she fell to the floor, tangled in the wire.

In the fog of grief and panic, he had a single thought: make it look as if she’s hanged herself. He closed the door behind him, slipped the key underneath, and drove to work, arriving just before 8 a.m…

Read the full report in True Detective May 2020 »