The Wife In The Wheelie-Bin

The Wife In The Wheelie-Bin 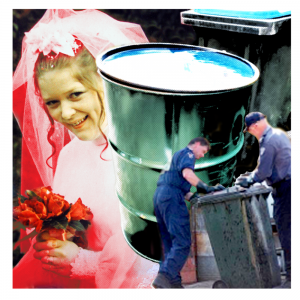 When his 30-year-old wife Edwina disappeared from their home in Melbourne, Australia, on October 6th, 1983, Frederick Boyle said she had run off with a trucker.

But her sister didn’t believe him. And when Boyle’s son-in-law found Edwina’s skull in a wheelie-bin in Boyle’s back garden 23 years later, Edwina’s sister told reporters: “She had sent us letters every single week, and then she suddenly stopped writing. It was so out of character. I knew she had been killed and there was only one person it could have been. Her husband told us a pack of lies, and all this time he has kept her body.”

Pleading not guilty when his trial began at Victoria Supreme Court on January 31st, 2008, he was alleged to have moved his lover into his home the day after his wife vanished; to have made no attempt to report Edwina missing, and to have collected her last wage packet from the chicken farm where she worked, saying she had run off with a man named Ray. He had also told her family in Wales not to be surprised if they did not hear from her that Christmas, the prosecution claimed.

Describing the discovery of Edwina’s clothes in a green drum and remains in a wheelie–bin, the prosecutor Mr. Gavin Silbert told the jury that Boyle’s son-in-law was doing a clean-up at the family home when he noticed the 44-gallon green metal drum. For many years he had asked Boyle what was in it, and had been told it contained only glue for carpet-laying.

Out of curiosity he cut it open, and inside it found a woman’s clothes including bras, underwear and a pair of yellow socks, along with a hessian bag. Later, he opened a green wheelie-bin in the garage.

“There was an unpleasant smell coming from the bin,” Mr. Silbert said. “He reached inside and felt a slimy substance. He pulled out a leg bone and also found a skull and several other bones…”