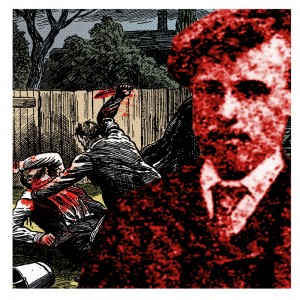 The local bobby, Walter Ford, 37, returned home to his cottage on the village green late on the night of Saturday, June 29th, accompanied by his wife Georgiana, 33. Constable Ford went out into the back garden to bring in some coal for the morning.

The officer stepped into the warm night, and to his surprise saw a young man in his neighbour’s garden on the other side of a small fence. The young man didn’t appear to be a burglar – he was just standing there. It was most curious. Then suddenly he shouted out: “Well, Walter, how are you getting on? Will you come and I will show you the light?” adding that he had come to “convert” him.

The officer and his wife knew immediately who it was. The young man announced that she too could be “converted.” By now the village policeman was more than a bit concerned. He decided the best approach was to try and soothe the man.

Much to Mrs. Ford’s annoyance and worry, her husband went over the fence, and began trying to reason with the young man. Suddenly he seemed to throw the constable to the ground and Mrs. Ford began screaming at the top of her voice into the still night air.

George Batchelor, 21, a nephew of Walter, who lived next door, reached the two men and could see, to his horror, that the assailant was stabbing his uncle with a pocket-knife. His mother could see the blade glistening in the moonlight and screamed out: “Murder! Murder!”

The man then turned on young George, and with great fury said: “You are just the man I want to see. I mean to do something and this is the day. I’ve got to do it.”

Bravely, George launched himself at the man but he was no match for the knife, and was himself repeatedly stabbed in the forehead and the back of the head.

The assailant fled into the darkness and, as George gathered his senses, he could see his uncle crawling on his stomach and then stop – he had been fatally injured. As the man fled, he stopped momentarily to rain down vicious blows with his knife. Other villagers were aroused by the noise and all recognised him: It was 29-year-old William Jacobs who lived with his aged father, a blacksmith, not far away…