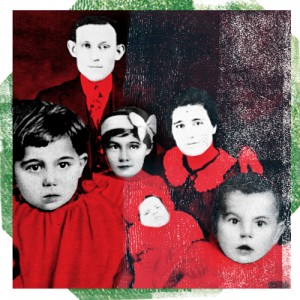 Beniamino Evangelista’s body was slumped in his chair before his desk. His severed head lay on the floor by his feet. Ellis Vincent ran from the house to phone the police. His call was logged at 10.41 and he was asked to remain at the scene until officers arrived.
Shortly afterwards, Patrolmen Kennedy Lawrence and Alex Costage found him awaiting them on Evangelista’s veranda. Moments later the officers were swallowing hard as they surveyed the scene in the contractor’s office.
Blood seemed to be everywhere.
In response to Patrolman Lawrence’s call, detectives and uniformed officers arrived, led by Chief of Detectives Edward Fox. “What about the man’s family?” he asked. “Anybody else live here with him?”
“Oh, his wife, of course,” Vincent answered numbly. “And four young kids.”
“Upstairs,” Fox ordered his men. They made their way up the staircase, side-stepping bloody footprints indicating a trail to further horror. Fox pushed open the door of the main bedroom.
The contractor’s wife and infant son lay on the bed. The woman’s severed head lay nearby and one of her arms was lacerated at the shoulder as if a hasty amputation had been attempted. Eighteen-month-old Mario Evangelista lay across his mother’s other arm. He also had been decapitated.
Stepping gingerly around pools of blood, the detectives went to the adjoining room which contained twin beds. On one lay six-year-old Matilda Evangelista, on the other her younger sister Jenny, aged three. Both had been butchered, their heads cut cleanly from their bodies.
On the floor, near the door leading to the upper veranda, lay eight-year-old Angelina. One of her arms displayed a deep cut at the shoulder. A yawning gash in her neck showed that the killer had also meant to behead her.
County Medical Examiner Dr. Paul Klebba arrived and viewed the mutilated bodies. He tentatively placed the time of the slaughter between midnight and 3 a.m. The killer, he said, had used a heavy weapon with a cutting edge more than a foot in length – possibly a cavalry sabre, machete or scimitar…