Murders Of The Batman Maniac

Murders Of The Batman Maniac 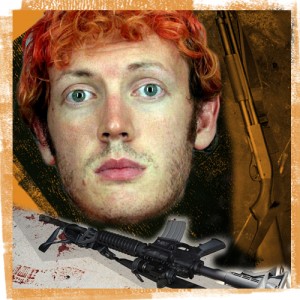 It was set up to be a fun night out. The aficionados had been waiting for a year for this – the midnight premier of The Dark Knight Rises, the latest Batman movie. They filed into the Century 16 multiplex cinema in Aurora, a suburb of Denver, laughing and chatting.

Some were dressed in Batman costumes. Some brought the kids, even the babies. Not much happens in Aurora, so this counted as a star event.

As the film rolled, no one noticed a young man arriving through a side entrance. He jammed open an emergency exit that led to the car park, then went back to his car to fetch his weapons. He had come to the screening not to watch the movie, but to kill everyone in the audience.

This was not fantasy. This was for real.

In the darkness no one would have paid any attention to James Holmes. If they had done so they would probably have noticed at once his wild, staring eyes. They would have seen he was dressed as The Joker, the nemesis of Batman, in black armour, complete with gasmask and a helmet over his dyed red hair.

They wouldn’t have had much time to notice he was armed to the teeth. For he was already spraying bullets at the startled audience.

Then suddenly there was blood all over the place. Everyone started screaming.