The Axeman Of New Orleans

The Axeman Of New Orleans 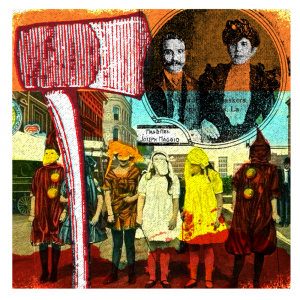 Joe Maggio, an Italian grocer, was sound asleep in his bed alongside his wife, Catherine, at their home on the corner of Upperline and Magnolia Streets, close to where the Ochsner Baptist Hospital now stands.

The stealthy killer had entered by removing a panel with a chisel from the back door. He sliced his victims’ throats with a razor as they slept and then beat their heads with an axe – perhaps to cover his method. Nothing was stolen. The axe was left in the bath.

Joe survived long enough to raise the alarm by gurgling loudly but died soon after he was found by his brothers, Jake and Andrew, two hours after the attack. Catherine’s head had been nearly severed; she had drowned in her own blood.

Before fleeing the scene, the killer had changed into a clean set of clothes, leaving his bloodied clothes behind. The razor was found in a neighbouring property. It belonged to Andrew Maggio, who was a barber. It had been picked up on the premises by the killer…