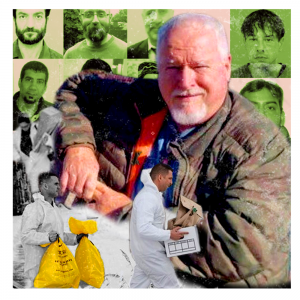 What’s it like to discover that your friend is a serial killer? How do you cope with the realisation that, behind all those jokes and confidences you’ve shared, there lurks a creature for whom life’s normal considerations are meaningless? An alien being who lives from one killing to the next – and will do anything to cover their tracks?

The friends of Bruce McArthur might be able to help you there. Because their very worlds have been rocked by revelations that have put their nice-guy friend in an entirely different light…

“He was just a regular guy,” says John Foot, who worked with Bruce McArthur in the 1970s. John lived in England for a time and invited Bruce to his home in London in 1980. “He wasn’t bad-tempered. He always had a smile on his face. He never betrayed a hint of a temper where you’d say, ‘Oh, he’s moody’ or ‘He’s bad-tempered.’”

The full horror of Bruce McArthur’s activities became apparent after his arrest. Cadaver dogs uncovered remains in dozens of planters created by McArthur at a number of homes across the city. Further skeletal remains were found in a ravine near his home.

Some could not, would not, believe it. “He’s a wonderful brother and father and grandfather and friend,” said his sister. “It’s not in his nature to do anything like this. He would do anything for anyone. He’s that kind of a person. He would not kill anybody.”

But on January 29th, 2019, before Justice John McMahon at the Superior Court of Justice, a weary-looking Bruce McArthur pleaded guilty to eight charges of murder. Most were relieved – it avoided a drawn-out series of hearings that could have stretched for up to five years.

Crown Attorney Mike Cantlon outlined some of the evidence held against McArthur. He kept digital photographs of seven victims. They included staged post-mortem photographs, often with ropes around their necks or with the victims nude in a fur coat or hat, with an unlit cigar in the mouth.

In some cases, McArthur had shaved the beards off his victims and kept the hair in zipper bags in a shed at a nearby cemetery.

The eight victims since 2010 had been strangled with a garrotte made from an iron bar and cords. This device allowed McArthur to ease the pressure so that his victims bordered on consciousness for who knows how long before they died.

“Most of the deceased had traits that made victimisation more likely or harder to detect,” said Cantlon. “There is evidence that Mr. McArthur sought out and exploited these vulnerabilities to continue his crimes undetected…”

Read the full report in Master Detective May 2019 »