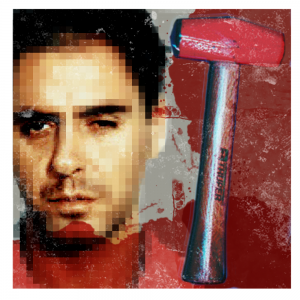 They called him the “Tourist From Hell.” Armed with a murder kit that included a hammer, butcher’s knives and a stun-gun. With this horrific arsenal on-the-run John Scripps dispatched his unsuspecting tourist victims with cold-blooded brutality.

Scripps was a loser almost from the start. He was born in Hertford in 1959, and his parents moved to London when he was very young. His lorry-driver father subsequently committed suicide, something that must have made a great impact on the boy, who was nine at the time.

At 14 Scripps disappeared in France from a cadet training camp to wander the country, stealing for his daily needs. A year later he appeared in juvenile court for burglary and theft. He left school to join the ranks of the unemployed, with no qualifications and unable to read or write.

His first adult conviction came in 1978 when he was found guilty of indecent assault and fined £40 at Hendon. Burglaries in London were followed by a jail sentence in Israel for stealing from a fellow-kibbutz worker.

Two months later he was detained while carrying heroin at Heathrow Airport, and in November the same year he was again arrested for carrying heroin and was jailed at Winchester – but absconded again while serving a 13-year sentence for heroin smuggling.

The record pointed to Scripps being an inept criminal, and he was certainly a failed human being. But one or two curious features about him were apparent early in his career. He liked to travel and commit crimes abroad – perhaps he felt that once out of Britain he was free to do as he wished. And he was able to boast that although he had been jailed four times in Britain, he had never finished a sentence. Each time he had absconded from home leave and then embarked on international crime sprees using false passports.

The final odyssey of John Martin Scripps began on October 28th, 1994, when he failed to return to Mount Prison in Hemel Hempstead, Hertfordshire, after four days’ home leave. The governor said later: “He was no longer considered a risk. He had no history of violence. He was quiet and reserved.” But, ominously, Scripps had been taught butchery in prison kitchens. It was a skill he was to find useful…