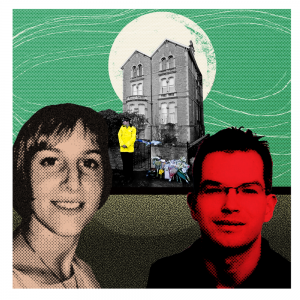 When her doorbell rang a week before Christmas at Flat 1 the owner, 25-year-old landscape architect Joanna Yeates, thought it must be her neighbour. She was right. What she didn’t know was that he had come to kill her.

The neighbour, Dutchman Vincent Tabak, lived at No. 2, the next-door ground-floor flat to Joanna’s in Clifton, Bristol.

Alone in his flat a few hours before ringing Jo’s doorbell, he had logged on to a pornographic website, downloading several images of an attractive blonde woman pulling up a pink top to expose her breasts.

Now, with those images and other depraved sex fantasies inflaming his mind, he was on the doorstep of his attractive blonde neighbour.

Jo probably knew only by sight the six-foot-tall man standing there. Their separate flats were two of six apartments in a big, converted Victorian building so they nodded to each other when they passed in the common ways. She may even have seen him passing her kitchen window that December evening.

Perhaps she briefly smiled at him. When she heard the doorbell perhaps she thought he was stopping by for a Christmas drink. But no such idea was in his mind.

As soon as Jo opened the door it was evident from later forensic analysis that he attacked her right there in her hallway. Tabak’s muddled story of what happened next can therefore have been only total fabrication.

“I got the impression she wanted to kiss me,” he said. “She had been friendly. I panicked and put one of my hands over her mouth. I said something like, ‘I’m sorry. Please stop.’ I wanted to calm her down. I can’t believe I did that. I was not thinking straight.”

In fact, Tabak beat her horrifically, inflicting 43 injuries on her body, including a fractured skull, broken nose and extensive bruising, before he pinned her down and strangled her in what the prosecution at his trial suggested was a targeted sex attack.

Prosecutor Nigel Lickley QC said: “Death was not instantaneous. He might have let her go, but did not. He knew she was in pain and struggling to breathe…”