Murder By Pitchfork On The Pig Farm

Murder By Pitchfork On The Pig Farm 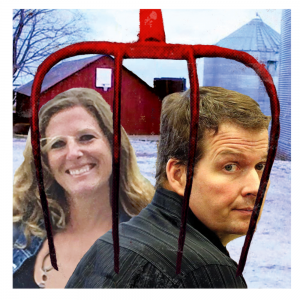 Since Todd Mullis had discovered his wife Amy’s affair in 2013, he had become so controlling and manipulative that Amy’s friends and family called her POT – short for “Prisoner of Todd.” If his marriage broke up, the 43-year-old farmer stood to lose half his land and millions of dollars.

But Amy wanted out, and there was good reason for that. She had discovered someone else. She was having another affair.

In the summer of 2018 the 39-year-old told her brother that as soon as all the crops were out of the fields she planned to leave her husband and then she would file for divorce. “Todd will flip out when I tell him,” she added prophetically.

She never got the chance. That November, as the last of the harvest was being gathered in, Amy’s 13-year-old son found her crumpled dead body in a shed used for storing the farm’s equipment. A corn rake, similar to a pitchfork, was sticking out of her back.

The boy ran to tell his father. When Mullis arrived on the scene he removed the corn rake, carried the body to his truck and drove to nearby Manchester Medical Center. This was the general hospital where Amy had worked as a state registered nurse before her marriage.

“It was a tragic accident,” Todd told the police. “I think she must have fallen on the corn rake while helping with the farm chores. It’s a very sharp instrument, you know.”

But that view of it didn’t stack up with the post-mortem findings, which revealed that Amy had six puncture wounds – injuries that didn’t match the tines on the rake.

Forensic pathologist Dr. Kelly Kruse, who did the post-mortem, noted that two of the puncture wounds were at an upward angle and four were at a downward angle. How could Amy have fallen up on to the rake and then down on to it in two separate motions?

That could never have happened, ruled Dr. Kruse, and she wrote down the cause of death as homicide. Someone had impaled Amy more than once, more likely two or three times, and therefore probably on purpose…