“Kill My Dad Then We’ll Have Sex,” Said Morgan

“Kill My Dad Then We’ll Have Sex,” Said Morgan 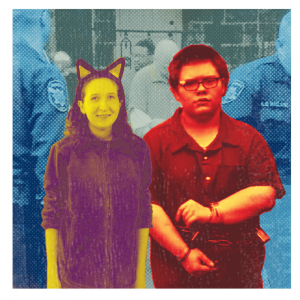 The plan to kill Morgan’s father, Dennis Lane, had begun shortly after they started hanging out together in February, 2013. Morgan, 14, told Bulmer, 19, whose learning disorder caused him to function at the level of an 11-year-old, how sick she was of her dad.

She said she felt he was controlling her life and she didn’t like it. Her mood slowly shifted from cold to deadly. And together they planned the killing with cool, detached efficiency.

In a series of messages, Morgan told Bulmer she would leave a door unlocked but to be very quiet because her dad was living with his fiancée, Denise Geiger, who might also be in the property.

In one diary entry Morgan wrote: “Dad was so rude to my boyfriend and me today. My boyfriend wants to kill my dad. I think I would like that. I want him stabbed with a knife, then I would leave him there to bleed out and die slowly and painfully. Then we’ll head to California, make love for the first time, and start our new lives together.” Just two weeks later, her wishes would begin to come true…

On May 10th, 2013, in the early hours of the morning, Bulmer, armed with his girlfriend-approved knife, walked several miles from his home to Lane’s residence. Arriving at around 4 a.m., he slipped in through the unlocked screen door to the basement, and found Lane asleep.

He attacked him with the kitchen knife, slashing away at his head, face and neck. Woken by the commotion, Denise Geiger ran into the bedroom and tried to fight off Bulmer. Lane broke free and Denise, who was uninjured, ran out of the house and called 911.

When police arrived minutes later, officers found Bulmer with blood on his hands and face, sitting on the floor next to Lane who was lying in a pool of his own blood and unresponsive.

“I am Morgan’s boyfriend,” said Bulmer calmly. “I stabbed him and she told me to do it.”

Morgan was also in the house, having seen her father murdered, but when initially questioned by police, she just murmured songs quietly to herself, seemingly unaware, and completely detached from what had just happened…