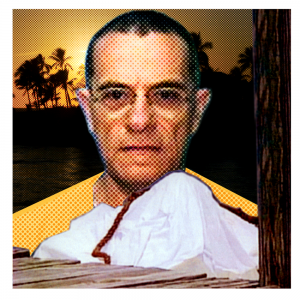 In the summer of 2002 the Gulf coast of Florida was enjoying its usual sunshine, and the morning of July 18th was a good time to savour the cooling off-shore breezes. So three men set out in a boat to do a little light fishing in Estero Bay, near the town of Fort Myers, unaware that they were about to make a gruesome catch.

It was Bill Hooper, a retired dentist, who saw something floating near them. “We’d just set off from dock when I saw something near the jetty by a row of beach houses,” he said later. “I thought it might be some driftwood or something that had fallen off a passing cruiser. When we got closer, my heart started pounding.”

Their discovery was a partially clothed body floating face-down, which police reports would later describe as the corpse of a white female of indeterminable age, killed two to four days earlier by four gunshot wounds to her chest. One bullet had drilled through her right hand on its way to her heart as she tried to protect herself, and the police spent almost a month interviewing locals and putting up posters in an attempt to identify her.

A missing-person tip from the woman’s niece and subsequent dental examination ultimately revealed the body to be that of Hattie “Fern” Bergeler Moringiello, a 57-year-old former aerospace worker at Cape Kennedy and the wife of Donald Moringiello, 64, a retired aeronautical engineer.

Yet he had not reported her missing. His first contact with the police was nearly a month later, on August 14th, when he returned home to find detectives searching his beach house.
When they confronted him with the missing-person posters they found there, he said he was planning eventually to file a report of his wife’s disappearance through his attorney.

“Twenty-nine days, and the husband never once expressed concern about his wife’s absence,” Detective Jim Briers said later. “What does that tell you? The first thing he said to me was, ‘I suppose you’re here because of my wife.’

“About twelve beach houses border Estero Bay in that area, and the current flows out to the bay. Moringiello lived in one of those houses.”

When Hattie was found, she had a white, king-size, fitted bedsheet over her head. A rope tied round her neck was secured by two heavy cinder blocks. Her bare feet had been carefully placed through a hole in a third block, and her ankles were bound with more rope to stop the block falling off. She was wearing green cotton shorts and a white floral print shirt, as depicted in the posters displayed nearby…