In The Footsteps Of Jack The Ripper

In The Footsteps Of Jack The Ripper 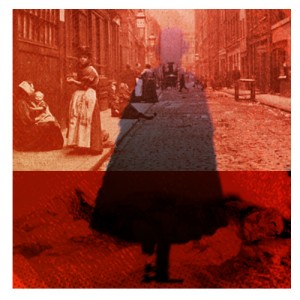 Today Dorset Street, reputed in its time to have been the worst street in London, is called Duval Street and all traces of its gory past have long since gone. Gone, too, is the triple-murder house, Miller’s Court.

It was on November 8th, 1888, in Room 13 of that house of sordid sin that the tenant, Mary Jane Kelly, became Jack the Ripper’s fifth, possibly last, victim.

She paid four shillings and sixpence a week rent for her tiny room, where she took the occasional client. Here on that glacial winter’s night she met the notorious Whitechapel killer and what he did to her defies all logical explanation.

When the Ripper arrived at Room 13, Miller’s Court, he went ballistic. He removed the whole of the surface of Mary’s abdomen and thighs and emptied her abdominal cavity of its viscera. He cut off her breasts, mutilated her arms, hacked her face and severed her neck all round down to the bone.

He skinned the right thigh to the bone and skinned and removed the muscles of the left thigh right down to the knee.

He placed the viscera in the oddest places; the uterus and kidneys and one breast were placed under her head and the other breast by her right foot, her liver between her feet, the intestines by the right side and the spleen by the left side of her body.

Pieces of skin and muscle were scattered on the table. Flesh and blood were scattered all over the walls, indicating the frenzy with which the Ripper had hacked at the body. He had turned No. 13 into a butcher’s shop, and all that remained of Mary Kelly was a heap of bloody flesh scarcely recognisable as once having been a human being….