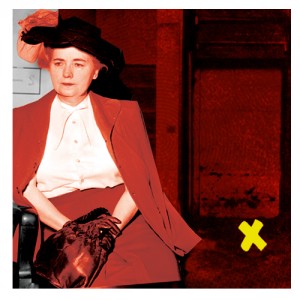 A new post-mortem was held, and this time it was revealed that the vertebrae in the victim’s neck had been splintered by a bullet. Shattered remnants of the bullet were still embedded in the vertebrae and in the bones of the jaw. What this also revealed was that the fatal shot must have been fired from behind.

Detectives now reconstructed the kitchen drama. They decided that on the morning of June 2nd Jacob Denton was sitting at his kitchen table with his back to the door when someone appeared in the doorway and shot him. His body was trussed up with ropes, dragged down the stairs to the basement, rolled in a quilt and thrust into the makeshift vault, which was then covered and nailed up.

It was time, they also decided, to charge Louise Peete with the murder.

On the rainy morning of January 19th, 1921, the curtain rose in Los Angeles on a drama in which the enigmatic Louise was to play the leading role. The prosecution maintained that robbery was the motive and that Louise Peete alone committed the murder. The Spanish woman was a mythical person, and the state wanted nothing less than the death penalty.

Louise, it was held by her defence, had no idea who killed Jacob Denton, and anything she did after the murder was no proof that she had killed him, because she didn’t even know he was dead. Moreover, it was physically impossible for her to have killed him and disposed of the body in the way it was suggested.

Louise appeared in court fashionably dressed in a tailored suit with a mink scarf around her shoulders. Her seeming indifference mesmerised spectators. How, they wondered, could someone in such a terrible situation behave so calmly?