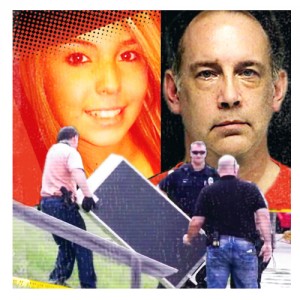 After exchanging messages for six months, she and Steve reconnected two years later, shortly after she’d landed a place at a community college in Oregon. Despite the difference in their ages, 52-year-old Zelich persuaded her to come and live with him in Milwaukee.

She texted friends to say she was ditching the college place and moving states to learn welding. Zelich told her to cut off all her old contacts and make it a new beginning. She agreed and bought a one-way ticket.

He went to pick her up at Milwaukee’s Mitchell Airport and watched eagerly as she walked towards him wheeling a large purple suitcase. It was June 2012, and he’d booked a room at a hotel in Kenosha, a tourist resort 40 miles away on the south-west shore of Lake Michigan.

But the pain and humiliation was probably more extreme than she’d anticipated or wanted. She was naked and helpless, but in a frenzy of power-crazed domination, he ignored her signal and strangled her with the rope. The asphyxiation “game” killed her.

Her body just about fitted in her big purple suitcase, and he dragged it down to the hotel car park in the middle of the night, heaving it into the boot of his car for the 40-minute drive home. For the next year or so, he kept her in his freezer, wrapped in a rubbish bag. No one reported her missing because she was always dropping out of touch with people.

Soon Zelich had another victim, and another body to store in the freezer…