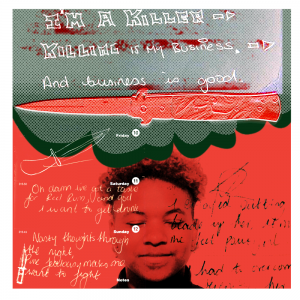 Detained at Her Majesty’s Pleasure – the juvenile equivalent of an indefinite sentence – Sharon Carr arrived at Bullwood Hall in Essex, a young offenders’ institute. It was here that she began to boast for the first time of having killed Katie Rackliff who had been stabbed 29 times after leaving a nightclub in Camberley, Surrey, in June 1992. Although there was no evidence of rape, the police assumed that they were hunting a male sex-killer…

Sharon did not confess all at once. The clues came in casual remarks she made to a custodial officer on whom she had developed a crush. She also talked about the killing to a probation officer. The staff began to keep a closer eye on her, monitoring her phone calls to her mother and other relatives and friends.

The contents of these calls were so explicit that the staff informed the police of their suspicions, and within hours sceptical detectives from Camberley were on their way to Bullwood Hall. For them the idea of a girl of 12 being the killer they had sought so long was barely credible.

On their arrival they were shown notebooks in which Sharon had doodled her thoughts, reliving the murder of Katie Rackliff. The scrawled notes and drawings were horrifying. They revealed that Sharon Carr was obsessed with death and violence and that she had somehow developed sexual feelings about the act of murder. Killing gave her the equivalent of an orgasm.

In the early pages the notebooks seemed innocuous. Soon she had begun writing her name as “Scarr” and more revealing passages came to light, letters and poems in which she gloated over the murder. There were endless drawings of a knife. On the third anniversary of Katie’s death, Sharon had written: “Killed KR – the death by knife wound and sex go together. They both take you and all women should be taken.”

In another note she had written: “I was born to be a murderer. Killing for me is a mass turn-on and it just makes me so high I never want to come down. Every night I see the Devil in my dreams – sometimes even in my mirror, but I realise it was just me.”

In a reference to Katie, Sharon Carr had written: “I wish I could kill you again.” On another page she noted: “Last night it occurred to me that killing her did me good. Now I know what I am capable of and I will do it again.”