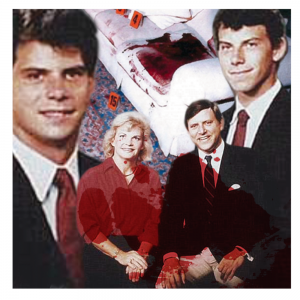 Lyle claimed he had returned from seeing the new Batman movie with his brother, Erik Galen Menendez, 18, to their $5 million Beverly Hills home at 722 North Elm Drive – a mansion once owned by Elton John. There, he said, they found their parents dead – apparently the victims of a home invasion.

The boys’ father, Jose Enrique “Joe” Menendez, 45, a Hollywood producer, and their mother, Kitty, 47, had been slaughtered in the family den as they watched TV and ate strawberries with vanilla ice cream.

“Kitty was wearing white. She was covered in blood,” said Beverly Hills Police Detective Leslie Zoeller. “Jose had a shotgun blast to the back of his head, blood everywhere. It was really horrendous.” The shotgun blast had more-or-less decapitated Joe.

The brothers were convincing in their grief. Erik had won a prize as Best Actor at Beverly Hills High, the location for the TV series Beverly Hills 90210. He wailed on the front lawn, curled in the foetal position. His distress may even have been genuine.

So it would be two months before detectives decided to interview the brothers. Police even failed to test for gunshot residue, so convinced were they that the boys were innocent.

A massive change in the brothers’ behaviour was their undoing. Their grief at their parents’ murder had flown out of the window, it seemed, and they were now busily spending their inheritance in a way that – even by Beverly Hills standards – was causing heads to turn…