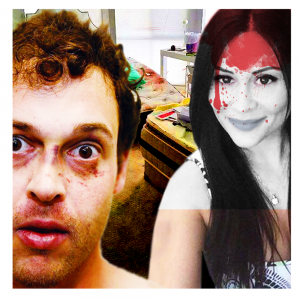 Most people have around nine pints of blood. When Blake Leibel had finished with Iana she had, according to a coroner, “less than a teaspoon.”

Most murders, usually with a knife or a firearm, leave a lot of blood around, but as soon as the heart stops pumping, blood starts to dry up and coagulate. Iana Kasian, pretty and perfect, took a long time to die as blood slowly drained out of her. It probably took about eight hours – hours of slow torture by a man she loved and the father of her new-born baby.

Life had been good just a few weeks earlier. Now she was strapped to a bed as her fiancé went to work with knife and razor…

As well as being tortured for eight agonising hours until she mercifully passed away, she had been scalped. There were bite marks on her face and defensive wounds on her arms and wrist. But most of the blood loss had occurred, Los Angeles County Coroner James Ribe noted, from the skull. “I have never seen this before,” he testified. “I doubt if any forensic pathologist in this country or abroad has ever seen this outside of, perhaps, wartime.”

The scalping didn’t appear to be incidental or an act of impetuous, post-murder vengeance. It was a clean incision, seemingly made with a blade, which curved around the base of her skull in a sharp line and back up around one ear.

Dr. Ribe testified that the skin and hair had been fully removed from her skull down to the surface of the bone, and “a portion of her face,” including her right ear, was gone.

In the basement, police found 11 trash bags waiting for disposal. They contained sheets, blood and chunks of hair and scalp. Gruesome barely covers it. Horrendous, horrific? Revolting, spine-chilling? Take your pick. But don’t dwell too much on what that young woman went through at the hands of her crazed killer…