Dahmer – Inside His Kitchen Mortuary

Dahmer – Inside His Kitchen Mortuary 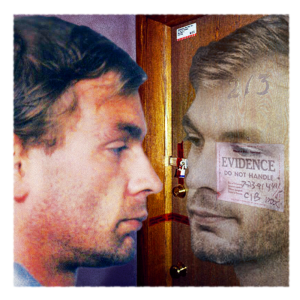 When Milwaukee Police Officer Rolf Mueller went into the kitchen, 31-year-old Jeffrey L. Dahmer jumped up from the settee and began shrieking. When Mueller opened the refrigerator door he knew the reason for Dahmer’s reaction. There, on the bottom shelf next to a box of baking soda, was a severed human head.

Officer Mueller didn’t need to see any more. He went back to the living-room and handcuffed Dahmer. Tracy Edwards confirmed he was the person who lived in apartment 213 who had tried to kill him. As the officers led Dahmer out of the apartment, he began meowing like a cat.

Over the next several hours a team of police officers wearing oxygen masks and protective yellow rubber suits began going through Jeffrey Dahmer’s apartment. It was only then that they – and soon afterwards the rest of the world – realised the full extent of the horrors that had occurred in Dahmer’s slaughterhouse.

Three more human heads and a human heart were recovered from a small chest freezer, along with a pair of lungs, a liver, a kidney and yards of frozen intestines.

Three headless torsos were found in a 55-gallon plastic drum, submerged in unknown chemicals, in Dahmer’s bedroom. Nearby were bottles of formaldehyde, hydrochloric acid and chloroform, as well as a number of hand tools and three electric saws…