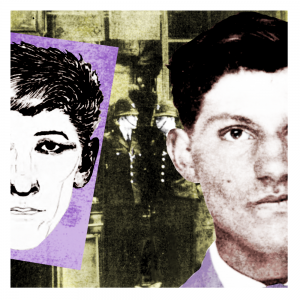 The newspaper headlines were colourful. “DEATH AMID THE JU-JU MASKS” said one. Subsequent reports explored the possibility of an Oriental curse.The murder victim was 59-year-old Mrs. Elsie May Batten, a well-known art critic and wife of the sculptor Mark Batten.

Friday, March 3rd, 1961, was one of those occasions, but when Mr. Meier returned at noon that day there was no sign of Elsie. Her handbag, however, was near the chair she usually occupied. Louis Meier looked around but nothing seemed out of place.

At the rear of the shop, however, a heavy curtain concealed the entrance to the workroom. Something protruded from beneath the curtain and, drawing it aside, Mr. Meier reeled back in horror. Elsie Batten’s body lay on the workroom floor with daggers “sticking into it everywhere,” as he was to say later.

Wearing her familiar brown cardigan and grey skirt, Mrs. Batten was sprawled on her side, the upper part of her body covered with blood. Her eyes stared sightlessly, and her contorted face emphasised the agony of her death. She had been stabbed with three daggers, part of a collection of five mounted on a counter just a few feet away.

One, an Oriental dagger with an ornately-carved ivory hilt, protruded from between her shoulder-blades. A small knife, Moorish in origin, with an ebony hilt inlaid with mother-of-pearl, had been plunged through her neck…