Ambushed By The Wolfman

Ambushed By The Wolfman 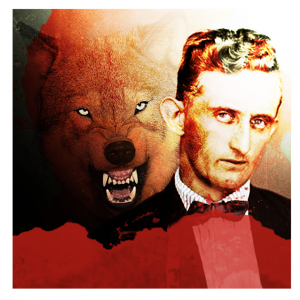 The heavy rain that had fallen that night seriously hindered the search for the missing couple. It had obliterated tyre tracks and footprints, and turned the terrain into a muddy swamp. Not quite all the terrain though. With his boots squelching ooze and mud, PC Bob Chaseling discovered a set of footprints that had been protected from the ravages of the weather by an overhanging tree.

He pushed his way through the thick bracken and reached a clearing. His keen eyes noticed at once that the earth had been recently disturbed. Peering closer, he saw three human fingers sticking up out of the soil. A dark patch nearby indicated that a body had lain there while the killer dug the grave.

Chaseling called up help and Superintendent William Mackay supervised the work of removing a couple of inches of soil to reveal the body. It was all that remained of Frank Wilkinson, and it was a horrifying sight.

The base of his skull was crushed in and broken in an irregular manner. There was a large cartridge in the cranium cavity and 72 grains of shot under the scalp. A jagged wound five inches long joined his nose to his forehead. There was a triple fracture of his jawbone. The wounds, a police doctor decided, could have been caused only by the discharge of a powerful shotgun close to his head.

The killer had tied his arms behind his back while he was still alive, and he had tied strips of rug from the sports car around his body. The attack must have been savage and brutal, instigated by someone in a state of insane rage.

“Comb the whole area,” Mackay commanded grimly. “We must find the girl. She must be buried around here somewhere.”

In fact, she wasn’t. The officers worked through the night but there was no sign of Dorothy. Another two days went by before a railwayman riding his horse along a disused track noticed a recent disturbance in the ground and called the police. A few spades turning over the soil revealed that this was the missing second grave.

If Frank Wilkinson had been brutalised, Dorothy Denzel had suffered even more. Her wrists were tied together behind her back and strips of her underwear were bound tightly around what was left of her neck. Her killer had raped her, and then blown away the back of her head with a shotgun blast at close range before finally slashing her repeatedly with a sharp knife…