Betty Wanted To Be A Gun Moll

Betty Wanted To Be A Gun Moll 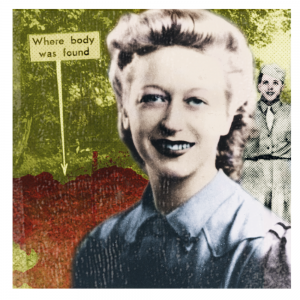 The boy-meets-girl story that would end in horror began when a Swedish-born American GI deserted and met an unemployed striptease dancer in wartime London.

He was Karl Gustav Hulten, 22, who boasted, untruthfully, of having once been a bodyguard to Al Capone. She was Betty Jones, 18, going under her stage-name of Georgina Grayson. She knew Hulten only as “Ricky,” and was doubtless impressed by the stolen pistol he waved around.

They met on October 3rd, 1944, in a London café, chance encounter changing their lives irrevocably.

Betty Jones had been living in a dingy single room at 311 King Street, Hammersmith. She was bored, she told Ricky, and she wanted to do something exciting. So they began robbing people they spotted in the street. They would stop their stolen army lorry and offer their intended victims a lift.

One, a young woman, was hit by Hulten several times with an iron bar and nearly strangled before being thrown into the Thames.

On October 7th, 1944, in the middle of the blackout and with Hitler’s V-1 flying bombs raining down daily, the couple hailed a private hire-car, a Ford V8 saloon driven by George Heath, 34. Betty admitted later that she had known from the start that the intention was to rob the driver.

Hulten asked to be driven to the Great West Road. Once Heath had obliged, Hulten shot him in the back, taking over the wheel and driving away at speed while Betty rifled the dying man’s pockets. She took money, a fountain pen, a silver propelling-pencil, a cigarette case, a wallet and a wrist-watch.

They drove on to Staines, 20 miles west of London, and dumped Heath’s body in a ditch, where it was found the following morning by a man on his way to work. Then an electrician’s apprentice found a discarded wallet and handed it over to the police.

Documents in the wallet established the identity of the dead man. It was known that he drove a Ford car, registration RD 8955, and tyre-marks were found on the grass verge close to his body…

Read the full report in Murder Most Foul No.110 »