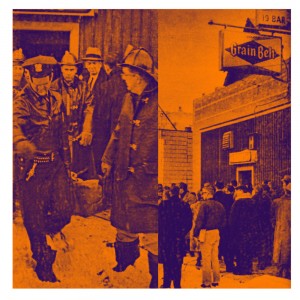 On the Monday after, just before 1 p.m., barman George Koch unlocked the front door of the Nineteen Bar on West 15th Street in Minneapolis. He unlatched the side door and busied himself around the bar.

A tall, greying man walked in. He wore glasses and carried a briefcase. “A beer,” the newcomer said. “My name is Trowbridge, Harold Trowbridge,” he explained. He was divisional sales manager of a printing company and wanted to show a new city directory for Minneapolis.

The door opened again and a tall young man wearing a black leather jacket strode in and took a seat at the bar next to Trowbridge. “Draw me a brew,” he said.

As Koch reached for a glass another, younger, man in a black leather jacket walked in and took the stool on the other side of the salesman. “You want a beer, too?” Koch asked him.

Leather jacket No. 1 glanced quickly over his shoulder towards the door. His companion seemed to measure the slight form of barman Koch with his eyes. Both put their hands into their pockets. Both raised nickel-plated revolvers to the level of the coping on the bar. “Lift ’em,” Jacket No. 1 said. “Up where we can see ’em.” He nudged Trowbridge with his elbow. “You too.”

“Clean out what’s in the register,” Cleft-chin ordered. Koch moved to the cash register, looking at gunman No. 2. This one was younger. No more than 20 or 21. His hair was also black and curly, but his face was thinner.

There was a little more than $200 in the till. George Koch scooped it out with one hand and pushed it across the bar. The gunman stuffed it into his pockets.

Harold Trowbridge sat stiffly on his barstool, his hands frozen at shoulder height. Cleft-chin nudged him with his gun. “Get up,” he said. “Start walking to the back.” He turned to Koch. “You, too. What’s back there?”

At gunpoint, the barman and the directory salesman made for the storeroom door at the rear. Thin-face opened the door and looked in. “There’s a safe in here,” he said to his companion.

“Open it,” Cleft-chin ordered the barman.

Koch dropped to one knee and started to turn the dial. When the tumblers clicked into place, he tugged at the handle. Behind him, he heard guns blast in a sudden deafening duet. Trowbridge pressed his hands to his chest as he went down. The guns barked again and white-hot pain stabbed through the barman’s back. Wheeling, Koch lunged to his feet and hurtled through the storeroom door.

He raced for the front door. Guns roared behind him and a hail of bullets whined close to his head, slamming into woodwork and shattering the glass of the front door. Three bullets tore through his shoulder, his back and his arm…