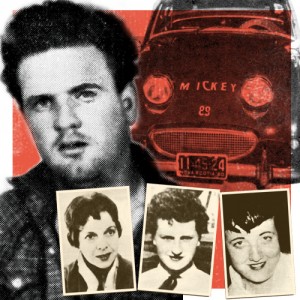 In the middle of the night of Sunday, October 9th, a police search party set out along a little-used logging road on the outskirts of Timmins. Helped by powerful emergency floodlights, they found the mutilated body of Kay Chouinor.

Her clothing was disordered and her underwear ripped. A 28ft-long trail of blood led from the side of the logging track into the bush. A hunting knife, claimed by Mickey Feener as his own, lay alongside the body. Its blade had been wiped clean on Kay’s coat.

Kay’s handbag was also found at the murder scene. It contained only her driving licence and a “take-it-yourself” photo of the victim – just like the one stuck with seven others on Feener’s dashboard gallery.

In a confession dictated without emotion, Feener told police how he and Kay got into an argument after he told her about how he had murdered another girl. He reacted violently when she told him he should go to the police.

“I beat her with my torch, then I started to stab her,” he said. “I thought I’d killed her. I was driving along looking for a place to get rid of the body when she suddenly revived.”

Almost dead from her wounds, she struggled valiantly to try to stay alive. “She said, ‘Mickey, honey, I’m not afraid to die. Death doesn’t scare me. But why do you want to kill me? What have I done to you?’

“I didn’t say anything to her. I just stabbed her once more in the throat and kept throwing her body against the riverbank until I was sure she was dead.”