Why Ruth Chopped Up Her Friends

Why Ruth Chopped Up Her Friends 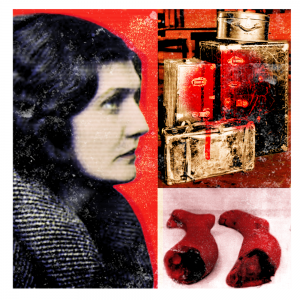 One day in 1931, Arthur V. Anderson, a baggage-man at the South Pacific station in Los Angeles, became curious about a couple of trunks in the baggage-room. The trunks had arrived a while before from Phoenix, Arizona, and it was evident from the aroma rising from them that something was not well inside.

Anderson wasn’t looking for murder evidence. He was looking for illegal shipments of venison into the state.

Blood dripped from the big black trunk onto the station platform. Anderson looked. Anderson sniffed. Anderson stuck around and waited.

Around noon a copper-haired young woman and a red-haired young man in a college sweater and corduroys walked into the baggage-room. The young woman handed two baggage-tickets to the man at the window.

“I want my trunks,” she said coolly.

The man glanced at the stubs, nodded and disappeared, to come back a moment later with Anderson.

“Sorry,” said Anderson. “You’ll have to open the trunks.”

The young woman hesitated. Then she sighed and said, “My husband has the keys. I’ll have to call him.”

“We’ll be right back,” said the red-haired youth. He took her arm and off they went. Being suspicious, Anderson followed, got the number of the roadster car the red-haired young man was driving, and then went back to wait. He waited three hours. More blood ran out of the big trunk. The noxious fumes thickened. He called the police.

Detectives Paul Stevens and Frank Ryan arrived. They looked at the big black trunk and the smaller steamer trunk. They hefted them.

Crowbar in hand, he set to work on the larger trunk. He pried off the lock and lifted the lid.

According to a newspaper report, the detective said in a hoarse whisper, “That’s not venison. It’s a human body.” Actually, he said something more pungent.

But undoubtedly his whisper was hoarse. Wedged in a crouching position and wrapped in a sheet was the body of a woman – a brunette about 30 years old. She was wearing orange silk pyjamas.

“Taken aback momentarily,” the newspaper account continued, “the officers stared at the grisly find. Then they set to work on the steamer trunk. By this time a small crowd had gathered. The lock gave way and the lid was raised. A man in striped overalls fainted. From the trunk protruded a human foot. Ryan took hold of it. A leg appeared – a leg severed at the knee.”

He then found another leg and the upper torso of a woman with head and arms attached. A few parts of the body, the upper legs from the knees to the hips, and the lower torso, were missing. Ryan also found evidence that the bodies were those of Agnes Anne LeRoi, a twice-divorced nurse, and Hedvig Samuelson, a tubercular schoolmistress, both of North Second Street, Phoenix. The trunks were full of letters addressed to the dead women and snapshots of them…