Why Did He Do It? His Wife In A Shallow Grave…His Children’s Bodies In An Oil Tank

Why Did He Do It? His Wife In A Shallow Grave…His Children’s Bodies In An Oil Tank 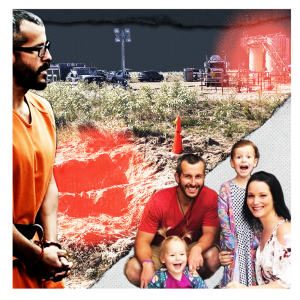 Chris Watts appeared calm and collected when he spoke to the crowd of reporters who had settled themselves all over his front garden.

The TV cameras whirled as 33-year-old Watts, handsome and bearded, made a plea to the public to help him find his pregnant wife and their two young daughters. All three had gone missing without a trace. Friends and family were all desperately trying to find them…

The police had been looking into the recent past of the couple who had everything, and they found things that didn’t quite fit the display for friends and family on social media.

For a start Chris Watts wasn’t deliriously happily with the idea of becoming a dad for the third time in six years. They were just getting out of their money troubles; the birth of Nico would stir them all up again.

And he was feeling lonely when Shanann was away so often. To compensate for that, he was having an affair with a woman at the office. She came forward into the glare of the investigation spotlight when she heard about the missing family.

After his arrest the 30-year-old was asked about her affair with Watts. “He’s a liar,” she said. “He lied about everything. He told me he had two daughters but he and his wife were getting divorced. We saw each other about five times a week.

“He said in July his divorce was finalised. Then on August 13th he texted me saying that his family ‘was gone.’ He said his wife had taken their two daughters on a play date and hadn’t returned.”

She said that something seemed “off” about his story, and then she saw on the news that the girls were missing. “I thought, if he was able to lie to me and hide something that big, what else has he lied about?”

Watts showed little emotion about his family’s disappearance. When the bodies of Shanann and the two girls were found, his mistress went to the authorities.

Small wonder that the police in Frederick, Colorado, were also more and more dubious about Watts’s story. On August 15th, two days after Watts claimed that Shanann had flown off to Arizona, they arrested him. They gave him a lie-detector test, and when he failed it they closed in on him.

“What have you done with your wife, Chris?” they asked.

He didn’t hesitate for long. “I strangled her,” he replied.

“When she returned from her trip to Arizona I suggested a trial separation. She became hysterical.”

Blindly, helplessly, he heaped on to his confession a mountainous lie. “I discovered she had strangled our girls to death to punish me, so in my grief I killed Shanann.”

So Shanann had killed the girls, and in revenge he had strangled Shanann. That just wasn’t believable.

Only one thing was certain in all this tosh – Shanann and the two little girls had been murdered. And there was only one killer – and that was Chris Watts, the “devoted” husband.

It hadn’t taken detectives long to wheedle the truth out of him. After his confession to killing Shanann, he took them to a shallow grave on an oilfield where he had been working. They dug down, and found her body wrapped in a sheet.

Then he showed them an oil tank only 100 metres away. Submerged inside were the bodies of Bella and Celeste. At this point, he was still insisting that Shanann had killed them. Medical experts declared they were killed at home, taken to the oilfield, and pushed through a small door into the tank…