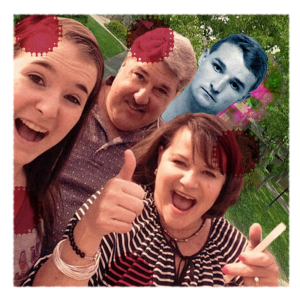 Alan Hruby loved the luxury lifestyle his family had worked for. Trouble was, he couldn’t afford it. When his parents threatened to cut him off financially, he hatched a deadly plan…

Taking a 9mm pistol that he’d found in his father’s truck, he began by shooting his mother Katherine. Maybe she’d been the one to put her foot down and insist that the tap to his cashflow would be turned off once and for all.

Whatever the reason, she walked into the kitchen to find Alan sitting at the table. He shot her at point-blank range and then, as she lay dying on the floor, he stood over her and shot her in the head to make sure.

Next came his sister, Katherine Jr. She’d been out in the garden, and came rushing in as soon as she heard the gunfire.

Alan shot her straight through the head, killing her instantly.

Then he calmly sat back down and poured himself a drink while he waited for his dad, John, to come home from running some errands.

He even put his feet up until he heard the sound of his father’s truck outside.

Then, as John walked through the door, Alan shot him, too. He told detectives that his father screamed in pain as the first bullet brought him to the floor.

According to Alan, John had a wide-eyed, staring look of horror on his face. Alan thought he saw some signs of life and, not wanting to take any chances on his father surviving, delivered another fatal shot to his father’s head…