Versace Gunned Down By A One-Man Killing Machine

Versace Gunned Down By A One-Man Killing Machine 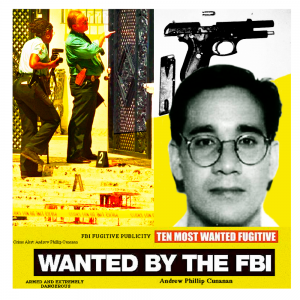 Like many very wealthy men, the internationally renowned fashion designer Gianni Versace took pleasure in simple everyday things. He enjoyed his regular morning stroll to buy an Italian newspaper and have breakfast at the News Café just down the road from his $3 million Miami home.

And as far as that went, July 15th, 1997, was like any other day. He was up at 8 a.m. and half an hour later he set out as usual from his Spanish-style mansion, “Casa Casuarina” on Ocean Drive, dressed casually in a shirt, shorts and flip-flop sandals. After a breakfast of coffee and fruit juice at the café he remarked to the proprietor, “It’s a beautiful day.”

It was just before 9 a.m. when he arrived back at Casa Casuarina. As he unlocked the ornate wrought-iron gates a young man wearing soft-soled trainers crept up behind him and pulled a pistol from behind his back. He pressed the muzzle against Versace’s head and shouted some curses in Italian. Then he fired twice.

The fashion designer fell, rolling down his white marble steps to end sprawling on the pavement, leaving a trail of blood behind him. His sandals lay forlornly on the steps with the blood-spattered Italian newspaper. Weirdly, a dead pigeon lay beside his body.

The cold-blooded assassin walked calmly away to where a yellow taxi was parked on Ocean Drive, its lights blinking as if signalling. Witnesses were to describe the man as white, in his mid-20s, wearing a white top, black shorts and baseball cap.
Within three minutes an ambulance was on the scene and Versace was rushed to the nearby Jackson Memorial Hospital. He was dead on arrival.

The police were puzzled by the lack of an apparent motive for his murder. No attempt had been made to rob him, so was he the victim of a Mafia execution or had he been killed by an embittered former lover?

All such theories rapidly dissolved when the FBI were called in and almost instantly linked the murder to a young gay serial killer who had been on their “Ten Most Wanted” list since June 12th. The suspect was Andrew Philip Cunanan, wanted for questioning about four recent murders…