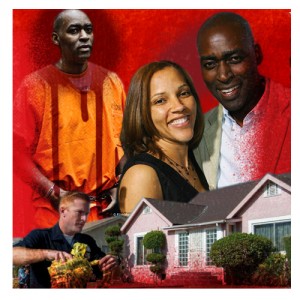 Best known for his role in the award-winning TV police drama The Shield, Michael Jace had been a film and television actor for 22 years when his world fell apart on a warm spring evening in May 2014.

His career had been drifting for a while, and though his CV included parts in CSI, The Mentalist, NYPD Blue, Forrest Gump, Boogie Nights, Planet of the Apes and Russell Crowe’s film State of Play, it wasn’t impressing a new generation of directors.

The situation had taken its toll on his second marriage to April Henry, an international gold medal sprinter ranked fifth in American athletics, and financial problems threatened the detached family home in Los Angeles’s Hyde Park neighbourhood, where they lived with their two sons. He began to drink, April began an affair and things slid inexorably to an ugly conclusion…

By May 2014, April had had enough and asked him for a divorce. He’d begun to drink and she felt unable to hold everything together. She was also having an affair, and was trying to keep her lover’s name secret from her husband in case he became violently jealous.

They rarely spoke now except to row and argue, and May 19th, 2014, was no exception. Jace had been texting April furiously all day, demanding to know whether she was cheating on him and with whom.

He told her he’d be out when she got home from collecting the boys, aged eight and five, from their baseball game. But when they all arrived shortly before eight o’clock, he was waiting for them.

“Take some cookies and go to your rooms,” he told them. “Your mother and I have some things to discuss.”

The row erupted again from where the texting had left it, and soon degenerated into a yelling match. Police had never been called to the house after reports of domestic violence, but now April lunged at her husband and he dragged her into the hall.

Only at that point did she realise he had a gun. But it was too late. Hardly had she finished cursing him than he pushed her. As she fell forwards, he shot her in the back.

Frightened by the noise, both children crept out of their rooms and now watched as their father fired again, this time at April’s right leg. As he aimed the gun, he snarled: “If you like running, then run to heaven.”

Then another shot rang out, this one to her left leg.

It was 8.30 p.m. when the 911 emergency service received a call from Michael Jace saying simply that he’d shot his wife. He added that he was no longer armed and had left the door open for the cops to come and get him. He had already telephoned April’s father asking him to come and collect the boys.

He told the officers he’d considered killing himself after murdering April, but couldn’t go through with it.

“All I intended to do was shoot her in the leg. But I just ruined four lives. I mean you could put the needle in my arm right now and be done. I’m fine with that.”