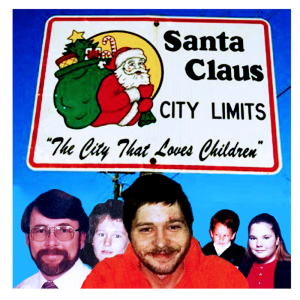 At 4 a.m. a farmer and his wife were awakened at their home some 45 miles away when their dog wouldn’t stop barking. Looking out of their bedroom window, they saw three little girls walking along the road in their nightgowns. The couple called the police, meanwhile taking the children into their house.

Shivering and in shock, the youngsters were aged eight to 10. They said they had been abducted from their home in Santa Claus earlier that morning. The oldest girl had been sexually assaulted and sodomised.

They gave the police their address, and two deputies were dispatched to the ranch-style house, arriving shortly before dawn. There was no response to their knocks on the door, which was ajar.

After several fruitless attempts to rouse somebody with their calls, they stepped inside, using their torches in the pitch darkness so as not to disturb any fingerprints. In the master bedroom the beams of their flashlights illuminated the blood-drenched bodies of Danny and Kim.

Down the hall the officers found Jessica Daniels, Danny’s 16-year-old adopted daughter from a previous marriage. Jessica had been beautiful, but now she looked grotesque. In her nightgown, she was stretched out on the bloodstained hallway carpet, apparently shot at close range.

In another room the deputies found eight-year-old Bryant, Danny’s son from a previous marriage. He had been sleeping with his teddy bear when someone shot his face away.

The officers checked for signs of life, but found none. Searching the house further, they found four-year-old Corey and Gabe, 10 months, both foster-children. They were huddled together in a cupboard, trembling like abandoned puppies. Taking the two with them, the officers retraced their steps out of the house and radioed for assistance…